Came home after dark and happened to look out the back door before turning on the lights. The balcony seemed to have acquired a lump. On closer inspection, it proved to be a huddle of grey fur, looking not unlike the dead raccoons you see by the side of the road. I was afraid some poor creature had crawled up there to die and I would have to dispose of it. Then the little bandit stretched, smacked his lips, rolled over, and went back to sleep with one hind leg in the air.

The raccoons have become so comfortable with my balcony, they consider it their personal den. I used to put down cayenne pepper next to the place where they climb in, but they just retaliated by leaving piles of turds on top of the pepper and in front of my balcony door. I appear to be losing a territorial war to creatures a tenth my size.

When brand new students show up at AEMMA wanting to learn medieval swordplay, I often volunteer to be the person who takes them aside and shows them the basics. After two or three classes of personal instruction, they’re ready to join the drills with the rest of the recruits. Attempting to teach something really helps to clarify its underlying principles. However, the upshot of this instructing is that every time I see a depiction of medieval-esque swordplay in pop culture, I’m seized by an overwhelming urge to correct the swordspeople’s form.

Even book covers are bad. There seems to be some kind of unwritten rule that everyone on the front of a genre novel has to be striking an awkward pose. Here are a few concepts that every newbie learns in their first classes at AEMMA, but the illustrators of many book covers have yet to discover.

The thing about swordplay is, it’s not like the flight of fairies or the conjuring of magic fireballs. It exists in the real world. There are plenty of pictures from historical fencing treatises and present-day action photos of Historical Eurpean martial artists on which to base an illustration. Why try to reinvent the art from scratch?

I have The Big Project off my desk for the time being. I may even begin posting again, just as soon as I find out what the rest of the world has been doing while my head was buried in my laptop.

Back in 2005 I did an evil, evil thing. Discovering the proliferation of websites where student plagiarists could copy essays, I wrote a Trojan horse paper about the Magna Carta and seeded it on a few plagiarism sites. The essay is basically wrong from beginning to end. Amongst other silliness, it claims that King John's titles included Duke of Hazzard, and observes that "peasants were reduced to eating burage and socage." It also invents a fictitious war against Flanders Fland (a region on the coast of Luxembourg) and cites such scholarly tomes as Bollock and Maidenhead's classic Interminable History of the English Law.

Every once in awhile, I google a few phrases from the paper to see how it's gettting along in the wild. Over the years, the two seed essays I planted have spawned a dozen or so Google hits at various disreputable sites. Sometimes they even want you to pay to see the whole text. However, for years I had no idea if any student had actually handed the thing in.

Oh my, oh my. The wording has been changed somewhat and some of the jokes were excised, but that's my essay there. Ranulf de Glanville has been changed from the Sheriff of Nottingham to "a mercenary of John," which totally wrecks the reference to Alan Rickman in the bibliography. (The student is probably too young to have seen that movie.) But since he's not Canadian, the bit about the notwithstanding clause sailed right past him.

He quotes the words "Discipulus tuus hunc tractatum non scripsit" in caps lock, but the professor for the course was an Americanist, so maybe he didn't get it? Did the paper pass? The student seems to have managed to graduate. Apparently he even minored in Latin!

Aaron Kerzner of Boston, I blow my nose at you.

ETA: The plagiarism sites now seem to want you to register in order to see the whole essay. You can read it in its entirety here.

Update: Good heavens, this post seems to be going viral out in the Twitter-sphere. For the record, it was not actually I who submitted it to CollegeMisery.com. Amusingly enough, I didn't know about that blog until I found my work copied and pasted there.

This photo pretty much sums up why Tim Hudak must never become premier of Ontario. 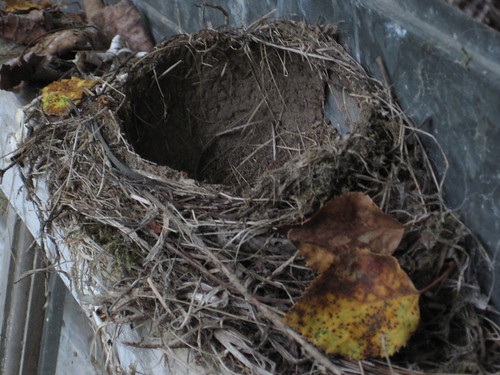 Found this behind the woodshed at the cottage today.

Hmm, I've been neglecting this blog, haven't I?

I also noticed the ubiquity of monuments to Dutch colonial history while I was there. Since I see that Clausewitz has a fair bit of Indonesian history on his bedtime reading list at the moment, I've put some photos up on my Flickr account. 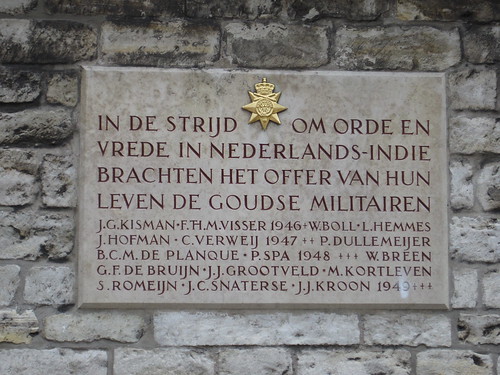 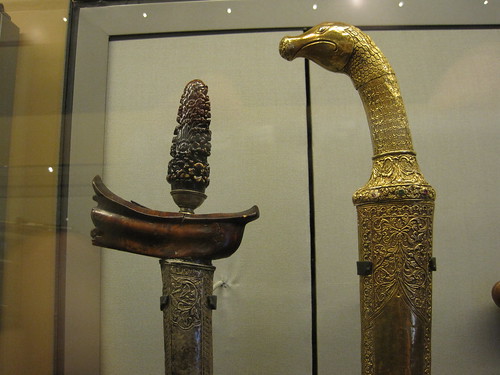 These are the hilts of a very nice kris and pedang in the Dutch military history museum in Delft. There are some twenty other pictures of Indonesian weapons from the museum in the Flickr set. 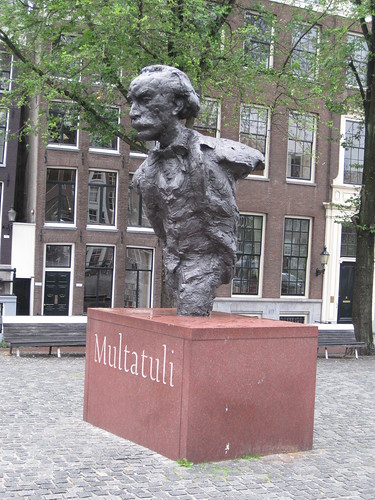 This is the statue of Multatuli, a.k.a. Eduard Douwes Dekker, in Amsterdam. He wrote Max Havelaar, a novel famous (though not in the English-speaking world) for exposing Dutch exploitation in Indonesia. It has been called the "novel that ended colonialism" around the world.

When I showed this picture to my father, he told me that Douwes Dekker's grand-niece had been my great-grandfather's housekeeper. When her uncle, Multatuli's son, died in 1930, she went to Nice, France, where he lived, to help tidy up his effects. There she found letters written by his father attempting to blackmail the Indonesian colonial authorities. He wanted them to give him money, or else he would publish Max Havelaar. I don't know if the letters ever made it into the archive of the Multatuli museum.

The other day I said to Ali, a new recruit at AEMMA, "Hey, you must read Arabic, right?"

"Of course I do!" said Ali, who grew up in Baghdad.

"Well there's this book sitting next to the European fighting treatises in the university library," I said. "From the pictures, it looks like another martial arts treatise, but it's in Arabic script and I can't read a bit of it."

And thus a translation was born. As it turns out, the Arabic martial tradition has at least as many manuscripts as the German and Italian ones. Not only that, but it starts earlier and it contains more basic training exercises. The Arabs fought everyone: the Byzantines, the Crusaders, the Mongols, the Persians, everyone. They were the clearing-house for martial technique, especially when it comes to cavalry. This should be really cool.

Ali's a busy guy, but I'm hoping he can polish up a translation of al-Ahdab this summer. Stay tuned.

Well that was depressing. Back to the drawing board.

ETA: Holy #%&*! Mathieu Ravignat got elected! We have a swordfighting MP! RAH!*


*I can almost forgive him for being an NDPer

It's that time of year again. Behind friends-locks, graduate student blogs are brimming over with a year's harvest of bloopers from over-caffinated, under-slept students. You can find all the old favourites: Charlemange, Martin Luther and the Prostates, various people who "serviced" other people, and several ideas that would make interesting alternative history novels. (Did you know that Lester B. Pearson was a president of the United States?)

Since the poor undergraduates are taking it on the chin this month, I thought I would post something a little different: amusing medieval history questions. I have a bad procrastinatory habit of hanging around on Yahoo Answers, showing wannabe authors where to find information about the Middle Ages. By the looks of it, the average age of users there is about 16. On a daily basis, various slackers post questions that obviously came from a teacher or a textbook, in the hopes that someone else will do their homework for them. Some of those questions are truly pitiful. You want to know why your students are so confused? Let me show you.

Why is the Magna Carta acknowledged by historians as the beginning of representative government in Europe?

In what ways was a medieval manor economically and militarily self-sufficient?

Is feudalism centralized government or decentralized?

How did the decay of feudalism contribute to the rise of national monarchies?

Some teachers seem to regard history as a kind of semiotics. Concrete things must not be studied for themselves, but rather as symbols. Nothing is a thing. Everything is a signifier for one single abstract idea. The resulting questions are so vague that the only good short answer is a snarky one.

What was the significance of the cathedral in medieval society?

What is the importance of medieval weapons?

What was the purpose of art in the Middle Ages?

And then there are the folks who don't quite seem to grasp that the European Middle Ages encompassed a very diverse collection of people covering an entire continent for roughly a thousand years. What are students supposed to do with questions like these?

What was the role of women in the Middle Ages?

What were the five forces of change in the Middle Ages?

How did attitudes towards the body change from the Greeks through the Middle Ages to the Renaissance?

At this rate, in a few years I'll have enough questions to write my own version of Non Campus Mentis.
Collapse